Very successful Warsaw Fulbrighter potluck yesterday. I spent the morning shopping, the afternoon cooking, and the evening eating. The hostess played her rented Russian harp, and we sang “Somewhere Over the Rainbow” and “Greensleeves.”

I made potstickers (and wrappers), a vegetarian tofu/kapusta/szpinak stir-fry, and Nigella’s pistachio fudge, modified with cashews and coconuts. Others made barszcz, salad, peach cobbler, and pączki.

I CAN HAZ POTSTICKERS

It was great to all be gathered together again after not seeing each other en masse since orientation.

There were Fulbrighter children at the party, which was really nice. A break in the age-isolation chamber of theater/academia. Some of them are attending Polish schools, despite not having known any Polish before they arrived. One of them is at a sports-oriented elementary, and she told us that, last week, the girls had to run 100 laps of the gym, and the boys 110. If my memory of the fourth grade serves, we never did anything quite that hard-core.

Plans were made to go see the Battle of Warsaw film together, z napisami angielskimi. Also, scheming was commenced for Thanksgiving. I may or may not have told a vegetarian Fulbrighter that I could totally figure out how to make a tofurkey from scratch. I have a memory of saying “There must have been a time when some vegan chick had to do it herself, and that was the first tofurkey.” Foot, mouth, etc.

Glorious review of TJT’s play about the Group Theatre, “In the Maze of Our Own Lives,” in the SF Bay Guardian. (Thursdays are PWYC at the door!)

What would Julian Barnes, Booker Prize winner (SO HAPPY!) say about this lovely Warsaw morning?
Probably something like this:

“Later on in life, you expect a bit of rest, don’t you? You think you deserve it. I did, anyway. But then you begin to understand that the reward of merit is not life’s business.

Also, when you are young, you think you can predict the likely pains and bleaknesses that age might bring. You imagine yourself being lonely, divorced, widowed; children growing away from you, friends dying. You imagine the loss of status, the loss of desire—and desirability. You may go further and consider your own death, which, despite what company you may muster, can only be faced alone. But all this is looking ahead. What you fail to do is look ahead, and then imagine yourself looking back from that future point. Learning the new emotions that time brings. Discovering, for example, that as the witnesses to your life diminish, there is less corroboration, and therefore less certainty, as to what you are or have been. Even if you have assiduously kept records—in words, sound, pictures—you may find that you have attended to the wrong kind of record-keeping. What was the line Adrian used to quote? “History is that certainty produced at the point where the imperfections of memory meet the inadequacies of documentation.”

I have no doubt that if he wanted to, Julian Barnes could make a tofurkey, and eating it would be like hearing a story you know you’ve never heard before but that somehow seems familiar already.

Chop up enormous amounts of kapusta. 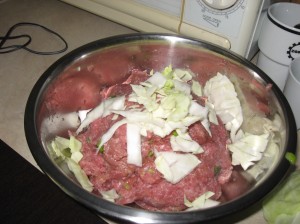 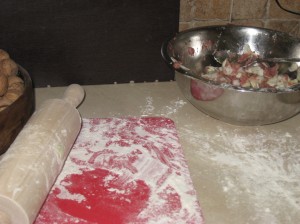 Ready to be cooked (first fried, then steamed).

The glorious finished product. I made around 80 of these suckers. 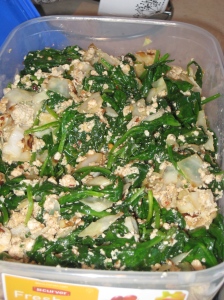 Too wiped out to make potstickers with the other filling; added spinach and made stir-fry instead.