Backstage at Teatr Chorea before a performance of BACHANTKI in Łódź, at Teatr Szwalnia, holding a cheat sheet of Greek chorus lyrics. Photo by Kailai Chen.

Dara Weinberg is a writer and theater person, originally from Los Angeles, often to be found in Poland. Forms related to the Greek chorus are an ongoing obsession. She is a doctoral student in Creative Writing, through Bath Spa University’s remote PhD. Her thesis is titled Invitation to Poland: A Memoir.

Writing: HowlRound.com, NewInternationalTheatreNews.org, Biweekly.pl, American Theatre Magazine, and elsewhere.
Directing: California, Oregon, Colorado, Maryland, Germany, Poland, and Hungary.
Teaching: Creative writing, theater, film, and media studies at universities in the US and Poland since 2009; many chorus and poetry workshops for actors and students. 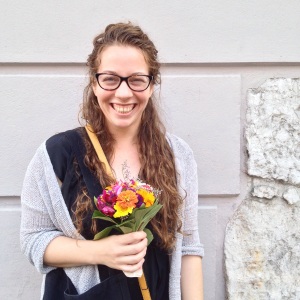 She holds degrees from Johns Hopkins (MFA, Writing Seminars) and Stanford and is the recipient of two Fulbright grants to study Polish theater.

She has co-founded two theater ensembles in the US: the Indy Convergence (IN) and Parallel Octave (MD).