One reason that Style Over Substance has been a bit silent is that I’ve been blogging a theatre festival (Teatr Chorea’s Retro//Per//Spektywy) in Poland at a different platform I made, called The Fifth Wall. This is going to be–already is, I hope–a place for writing about process (and not only in theater) in a more formal manner. 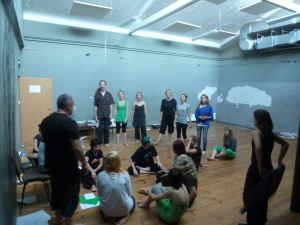 Singers rehearsing for the “Pieśni Świata” (Songs of the World) concert, during Retro//Per//Spektywy.

Links to the posts from this festival, and thoughts on festival blogging and blogging-as-a-whole, follow:


I still need to blog about the last and final (ninth) day, and write a recap, but there is a lot here thus far. Thanks again to all those of you who have read these, in Poland and otherwise, and let me know what you thought.

I did this kind of festival liveblogging once before (and again on a different site) the first time I came to Poland, for the Rok Grotowskiego 2009, as part of the US Artists Initiative. I don’t know if it’s the self-scrutiny of daily blogging, or just my own tendency to walk into high-stakes situations, but in each case, something more dramatic, above and beyond the festival itself, took place and made it into the blog.

Here in Łódź, it was the posters Chorea chose to put up; in Wrocław in 2009, it was the very strong reaction I had to TPK’s Scottish play, and my feeling that, despite being more burned out than Edna St. Vincent Millay, I was going to drop everything to investigate these people further. (Sorry. Obligatory ParOct Anth II reference–and video!)

I think it might be true that whenever one chooses to write about something very deeply, more comes to the surface than the something itself. And I think that the next time I promise someone to semi-liveblog their theater festival, I will be aware, when I do it, that I am probably also committing to liveblog myself and whatever is going on with me at that time. There doesn’t seem to be any getting out of it. Knowing this will not make it easier, but it will make me more informed.

Another reason that Style Over Substance has been muffled lately is everything Emily Gould has said here. Strangely enough, reading it made me realize that I needed to keep blogging myself, despite the inherent problems. The choice to continue blogging is a choice to retain some control over those issues, to manipulate and interfere in them. Being forced out of your own site because you’re feeling tongue-tied is no good. I certainly don’t have as dramatic an arc as she does, but I, too, used to use this site as a kind of solace–and found it harder to do so as I got older. I’d like to find a way to keep things going here. I’m going to try.