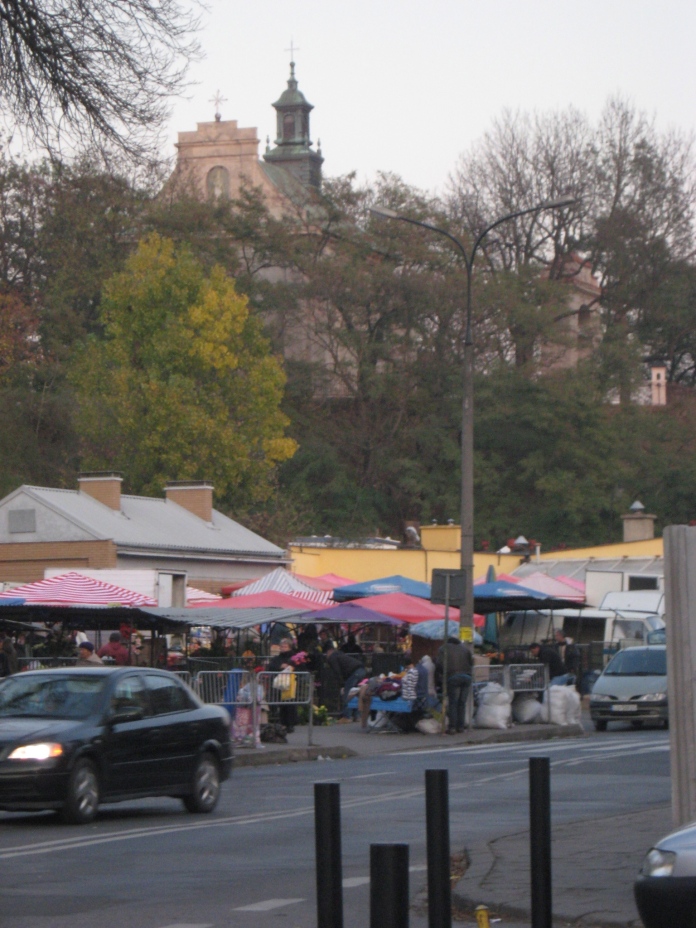 The tops of churches above; the brightly-colored umbrellas of a streetside "bazar" below. Lublin on a late weekday afternoon.

Stardate: Tuesday, November 25, 2011, and I’m on my way to Lublin for a festival of plays about climate change and its effects on the agriculture and economy of the African continent–plays created by Czech, German, and Polish theater companies. The plays are touring to the home city of each of the companies; Berlin, Brno, and Lublin. It also just happens that the German company is the Berliner Compagnie, who I worked with in 2003.

I have a very good feeling about this trip. I’ve already mentioned my obsession with Isaac Bashevis Singer’s novel “The Magician of Lublin” on this blog, but I’m going to mention it thirty more times before this blog post is over. I have such a good feeling that I don’t leave my house until one hour before the train’s supposed to leave. This, I think, as I slide into Warsaw’s Dworzec Centralna with only fifteen minutes to buy a ticket, is cutting it too close.

The train itself was a smaller and less flashy version of the InterCity trains I’ve been riding between Warsaw and Wroclaw. I didn’t have an assigned seat, but there was plenty of room. I felt as if this voyage, Warsaw-Lublin, was my first new adventure in Poland. An entirely new city. No more of this bouncing between Warsaw and Wroclaw. This, I was hoping, would be the real Poland.

My roommate, the knowledgable (and Polish!) M., told me that Lublin would be colder, and she was right. From the moment I stepped out of the station, I knew the air was going to be sharper here. There appeared to be no tram stop, only lots of different buses. I knew my hostel was north of the station, but not exactly how to get there.

One map bought later, I found out that there was a bus stop called “Plac Singera,” for Isaac Bashevis Singer. I got really excited, and decided that whether or not this stop was convenient to my hostel, I was going there. It was…close enough.

Pictures! Sorry to start with this one, but, you know…I felt some documentation was necessary. 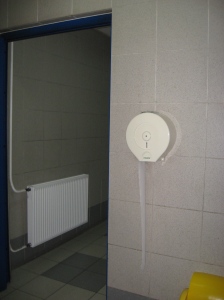 Remember how, in Soviet-occupied countries, toilet paper was scarce? There would be one dispenser outside the stalls, and you had to take in as much as you needed. Yep. In certain parts of Poland...that is, Lublin, and other smaller towns...the citizens have not yet replaced this system. Arrrgh.

I boarded the #34 bus, along with a great number of women wearing berets, and we were off.

Along with the colder weather, the elevations of Lublin–almost every street is either going downhill or uphill–made me feel as if the place was quite a lot like Ithaca, NY. It’s also a small town, a friendly and somewhat sleepy town, and a college town. Groups of college students were wandering on and off the buses. The buses were old and rickety. Although it is still a city, and a modern city, there was enough of the slow pace and the quiet streets to make me feel that Singer’s Lublin was somewhere underneath the surface.

And I got off at…you guessed it… 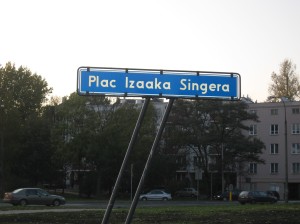 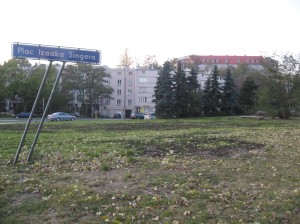 Sadly, it's just a street name, with a sign in an empty field. No statue. But still, cool.

After some wandering around Plac Singera, I made my way south towards Aleje Tysiąclecia, suitcase in tow. 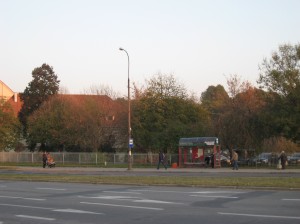 A small town, but not empty-feeling. Just small.

The streets were pretty empty, but the few people I saw seemed…like people in Ithaca, NY. A slower pace. A self-satisfied sense of “Why, yes, we DO live in a very beautiful place…and we don’t care that it’s not a big city…!” It was as if there couldn’t possibly be anything to be in a rush about. 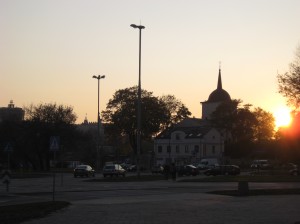 Sun beginning to go down--I arrived late in the afternoon. Should probably find the hostel... 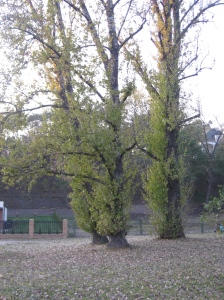 Even the trees are wearing jackets. Because Lublin is cold. 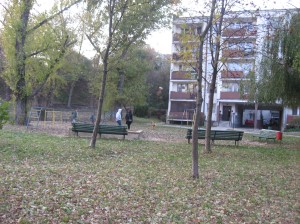 Parents playing with kids in one of the playgrounds by an apartment building. Sweatshirts, jackets. 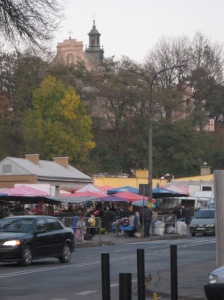 Street market on Aleje Tysiąclecia. So much elevation to Lublin--it seemed as if everywhere I looked there was something going on up high, and something else at the bottom of my field of vision. It's a town of hills, of ups and downs. 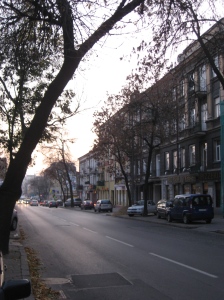 Now I'm finally on the street the hostel is on, ul. Lubartowska. This almost feels like San Francisco, heading up a steeply angled street.

I made it to the hostel, checked in, and made plans to meet up with my friend at the show.

From the hostel, I boarded another rickety old bus that would take me to the Old Town, where I bought a kebab for myself and flowers for the German actors.

The flower seller in front of Brama Krakowska (Krakow Gate–pictures in next installment) was being pestered by an old man who seemed as if he might be homeless–one of the first such people I’ve seen in Poland. I gave him the change, which was as much as it was to buy a bunch of flowers.

I navigated the buses without incident and arrrived at the Lublin Warszaty Kultury, the venue for the show, when it was quite dark. 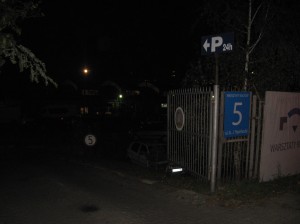 The dark, ominous gateway to the parking lot of the Warsztaty Kultury.

Really? There’s a theater in here? 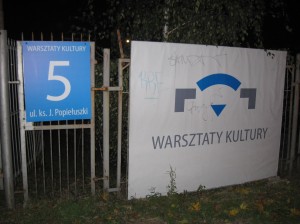 Well, the sign *does* say this is the right place... 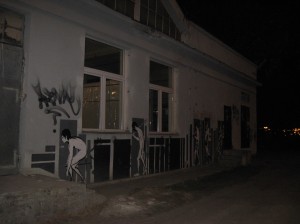 Cool graffiti and murals outside the building...but I still can't find the front door...

Aha! The entrance! And an enormous converted loft space, too… 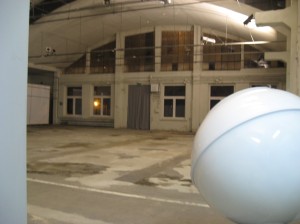 I find the lobby for this evening’s show, where there are posters talking about the effects of climate change on the African continent. 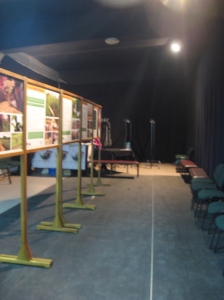 And I wait for the show to begin.

While waiting, E., one of the actors I know from Berlin, wanders out and we have a reunion. My friend A., another Fulbrighter, joins us–and we go into the theater for an evening of German political theater with Polish supertitles. Just another day in the theater, I guess.

After the show, I and the B.C. actors wandered the Old Town awhile trying to find food, but failing. Since I am (relatively speaking) more familiar with Poland than they are, I actually got to ride in one of the taxis and kind of be in charge of talking to / paying the driver. I was deputized, by the Polish festival people, to be responsible for the confused German people. Boy, did that make me feel like I had made some progress here.

Lublin is not a great place to get a) food after 11 PM b) anything if you have a gluten allergy. But I don’t care. The more time I spend there, wandering up and down the angled streets, shivering into my Chicago-era jacket, the more it feels like Ithaca, NY. And I love Ithaca, NY.

I do what I have done for the past few years–leave the party at midnight, no matter where it’s at. The actors are going back to their hotel in search of…something. I abandon them for the hostel. The guide insists on calling taxis for all of us despite the line of waiting taxis, because the waiting taxis are more expensive.

While we wait, the director from the Lublin theater (who translated the German play into Polish for the supertitles) chats fluently with the Germans, the Poles, and with me. I start imagining seeing these same plays in Brno, on that leg of the tour, only with Czech supertitles. I’m looking forward to seeing the Czech play tomorrow.